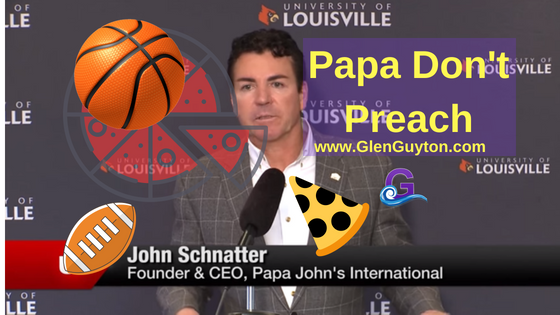 John Schnatter is no longer the CEO of Papa John Pizza. One question that remains is how long will he be the face of the franchise in its marketing? According to an ESPN report, former Papa John Pizza CEO and founder John Schnatter, also submitted his resignation to the University Louisville’s board of trustees Wednesday, July 11, 2018, after a story came to light about his use of the N-word during an internal conference call. Based on most reports the use of the N-word was not directed at any particular person, but the term was used by Schnatter to distance himself from real racists. Huffington Post reported, “After asking how he could distance himself from the racist groups that rallied in support of him online, Schnatter complained that Colonel Sanders of KFC fame never got public backlash for his remarks. ‘Colonel Sanders called blacks n*****s,’ said Schnatter, according to Forbes. (Forbes censored the word in its report.)” Schnatter’s alleged behavior and comments are textbook examples of being tone deaf and cultural incompetence. The N-word is not an acceptable word for use in the boardroom and especially by someone in the dominant culture. Also many felt that Schnatter’s comments related to the NFL protests were borderline racist. It makes me question the HR training and the culture of the Papa John company. What is the corporate culture like and who was in the boardroom when Mr. Schnatter thought it was good business practice t0 allegedly use this particular choice of words?

Organizations that lack diversity, inclusion and strong intercultural competency training put their brand reputation and profitability at serious risk. Papa John shares fell as much as 5.9 percent on Wednesday, July 11, 2018, to $47.80 as of 11:05 a.m., the lowest intraday level since February 2016. One might also question what type of diversity and inclusion training does the University of Louisville have in place. One person has potentially damaged the reputations of two organizations.

Why do organizations fail?

Papa Johns is just another link in the chain of national organizations, not effectively navigating culture, wasting time, money, and human resources. Sure being intentional about diversity and inclusion is hard work and expensive. But think about the cost when companies don’t educate themselves and all levels of their staff.

Here is a short list of companies and organizations that got it wrong. #diversitygoals

Bottom line cultural incompetence is just plain bad for business. Check out my past post about Bad Ads.

Is your organization in need of cultural competency training? Are you having trouble developing effective diversity and inclusion solutions? Don’t know where to start? Feel free to contact me to help protect your brand and your profits while at the same time creating a culture that effectively builds upon the gifts and talents of a diverse workforce. GlenG@GlenGuyton.com